A little over a week ago, mpmath became 1 year old! I made the first SVN checkin on September 25, 2007. The source recently reached 10,000 lines of code (14,000 including blanks and comments), so it has grown up quickly.

The last release (version 0.9) happened over a month ago. There have been a lot of changes to the trunk since then, including linear algebra functions (written by Vinzent Steinberg), function plotting (using matplotlib), significantly improved interval arithmetic, polygamma functions, fast computation of Bernoulli numbers, Gauss-Legendre quadrature, and many speed improvements/bugfixes.

As a teaser, here is the Riemann zeta function on the critical line: 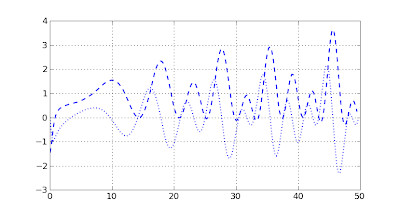 With all these additions, it’d be nice to make a new release soon; especially since 0.9 isn’t compatible with Python 2.6. Now, I’m not personally going to switch over to Python 2.6 immediately (since some of the libraries I use aren’t available for it), but most likely some users will. An advantage of mpmath’s pure Python design is that it should work with minimal changes across Python versions, and the only reason it doesn’t work with Python 2.6 is a trivial bug (“as” being used for a variable) which has been fixed in SVN.

I’m currently working on some rather heavy (and long overdue) global code cleanup, and there are too many loose threads to make an immediate release. But hopefully there will be one within 1 or 2 weeks. (The main obstacle, as usual, is that I also have upcoming exams…)

Of course, for anyone who wishes to play with the new features right now, it’s easy to check out the current SVN trunk.

In other news, the mpmath website recently vanished from Google’s search results. I hate when that happens…